In order to X-ray a painting, an X-ray tube is placed on one side of the painting and an X-ray film or digital imaging plate on the other. Health and safety regulations dictate a strict protocol, and in many countries a diploma and approved set-up is required for taking X-rays. The fixed dimensions of the X-ray film or digital imaging plate also means that, depending on the size of the painting, numerous X-radiographs must be made allowing sufficient overlap of the individual films or plates. The use of Image Quality Indicators (IQI) and carefully recorded metadata is recommended as differences in radio absorption can make comparison of X-rays difficult. Given the higher resolution of film versus digital X-radiography means that film is often the preferred method. In the Rijksmuseum both methods are in use. In the case of film, usually the individual X-ray films are scanned at high resolution in order to make a digital overall assembly of the entire painting. This allows for the original X-ray films to be preserved, and for easier and more detailed examination. It is also customary to study the X-ray film (the negative) and not the positive print of the film, as white areas in the film generally correspond with light areas in a painting making for easier comparison of the X-ray with the painting.

The illustration shows a schematic diagram of the process of X-raying a painting, which is made of many layers, including the support, ground and paint layers [1]. Since X-rays are recorded in transmission, the primary X-rays pass through all the constituent materials and layers before being captured by a sensitive film or plate. Both the frequency and the amplitude of the X-ray source affect the quality of the resulting image.1 The degree to which X-rays pass through a painting is dependent upon the atomic number, density and thickness of the materials. Pigments and features composed of materials with high atomic number will block X-rays and the radiographic image will appear light. When X-rays pass more easily through the constituent layers of a painting the image will register dark in the X-ray film. As a result not all materials register equally in an X-radiograph, and some materials do not register at all. Moreover, since the radio-absorbencies of the different layers are superimposed on top of each other, it is often challenging to distinguish which features belong to which layers.

In fact, any material that absorbs X-rays will be superimposed in the radiographic image (stretchers, nails, seals or even a lining adhesive or paint layer on the back of a painting). If for example, the ground on a painting is radio-transparent and a lining canvas was applied using a radio-absorbent adhesive, it will be the lining canvas that will register in the X-ray image rather than the original canvas. And in the X-ray of The Milkmaid (L07), for instance, metal screws from the construction of the stretcher are readily visible, in addition to the many small metal tacks used to attach the canvas to the stretcher [1]. Such features, in combination with the huge variety in artists’ materials and painting techniques, can make the interpretation of X-rays of paintings particularly challenging [2a, 2b and 3a, 3b].

1
The primary X-ray beams emitted from the tube pass through all the layers of the painting to varying degrees and are captured on a film or a digital imaging plate. The resulting X-ray image shows a composite of the radio-absorbencies of the various layers. It is important to realize that not all materials in the painting will register in the X-radiograph. Varnish is transparent to X-rays, while the radio-absorbency of the paint varies depending on the pigments present and the thickness of the layers. The canvas support is essentially transparent to the X-rays, but the penetration of a radio-absorbent ground in the interstices between the threads of the canvas allows the weave pattern of the canvas to be visualized in the X-ray. A wooden stretcher appears as a lighter region in the X-ray. 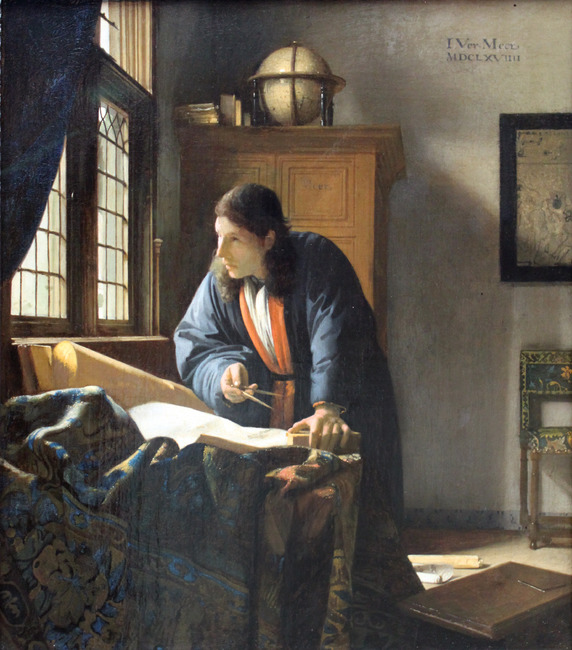 2b
Detail of the lower left corner of the X-ray of The Geographer, showing the seal and label on the reverse of the painting. The superposition of these features with those of the painting can make interpretation of X-rays challenging. 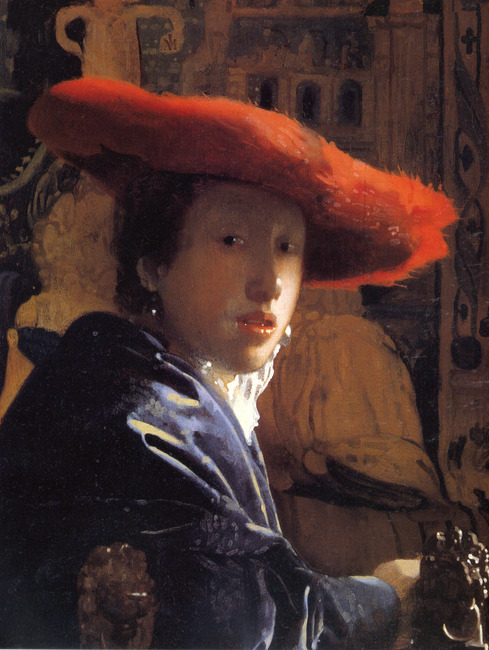 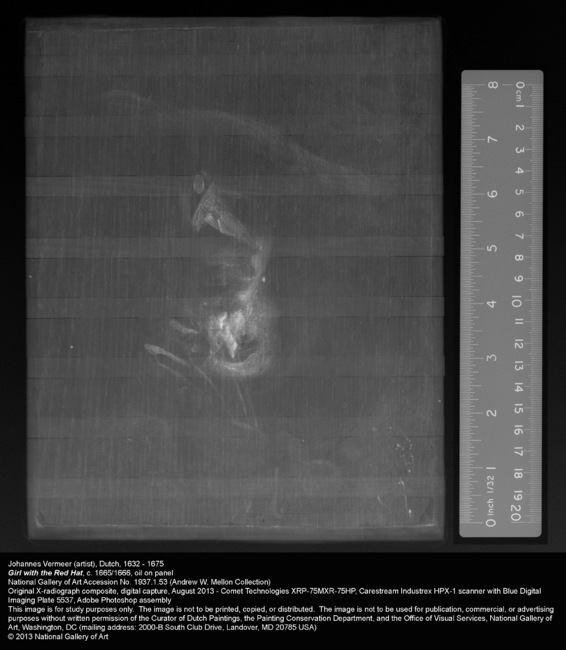 3b
The X-ray of Girl with the Red Hat shows that the girl was painted over an underlying portrait of a man (upside down compared to the girl).

A significant problem in the reading of X-radiographs is the interference of stretcher bars [4a, 4b]. This can be avoided by placing the X-ray film between the stretcher and the canvas, such as shown in the X-ray of Woman Writing a Letter, with Her Maid (L31) [5a, 5b]. A disadvantage of this method is that the outermost edges of the painting will not be captured in the X-ray film. Another method to enhance the readability of X-rays is to remove the stretcher bars digitally.2 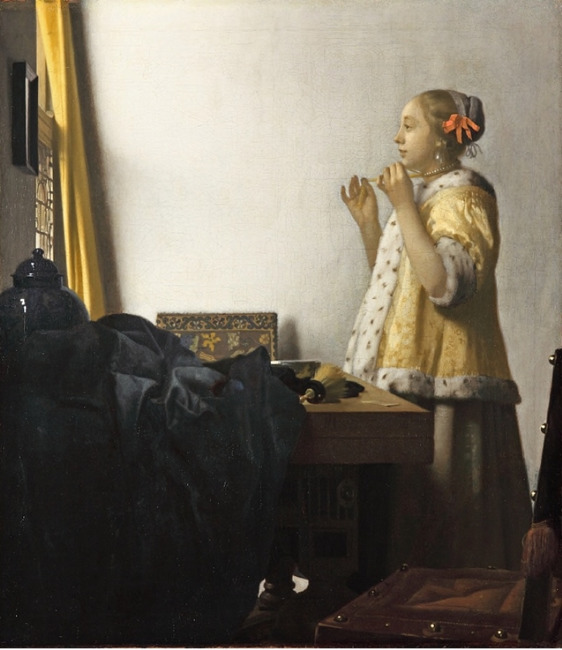 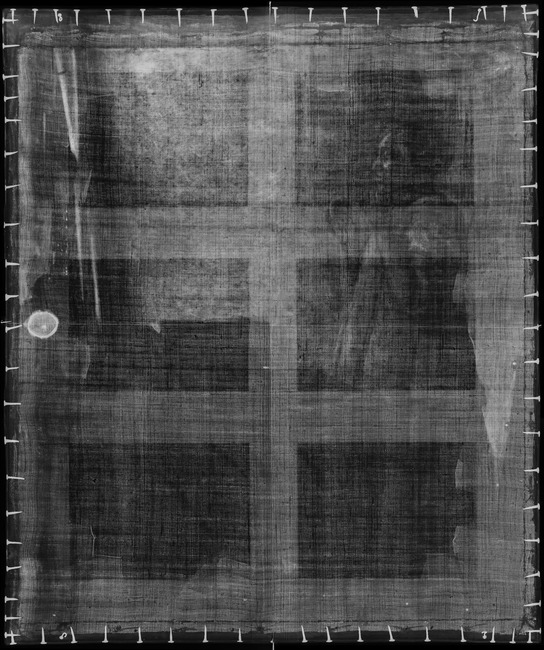 4b
X-radiograph of Woman with a Pearl Necklace. The stretcher bars strongly interfere with the readability of the X-ray. 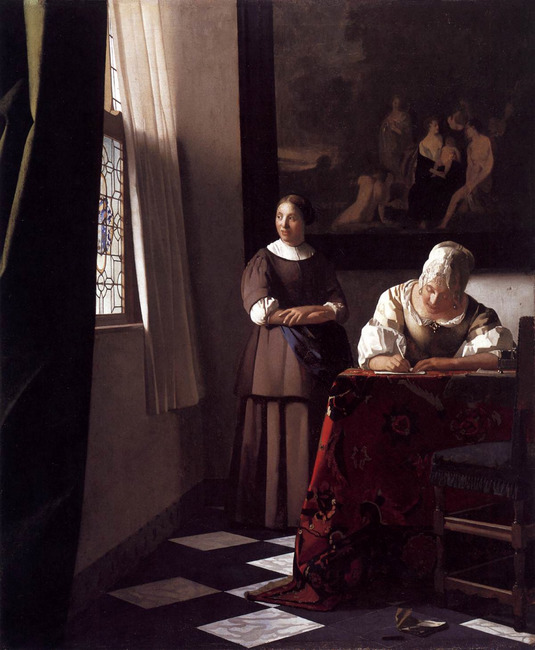 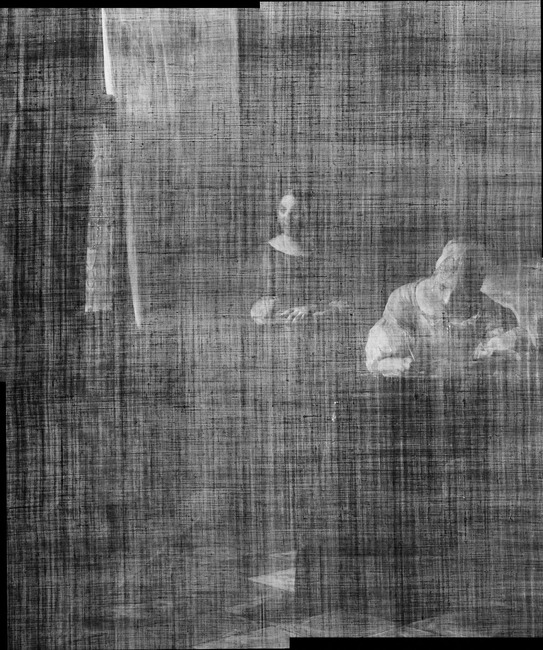 5b
X-radiograph of Woman Writing a Letter, with Her Maid. The stretcher is not visible in the X-radiograph as the X-ray film was placed between the stretcher and the canvas support.

Our site saves small pieces of text information (cookies) on your device in order to deliver better content and for statistical purposes. You can disable the usage of cookies by changing the settings of your browser. By browsing our website without changing the browser settings you grant us permission to store that information on your device.
I agree